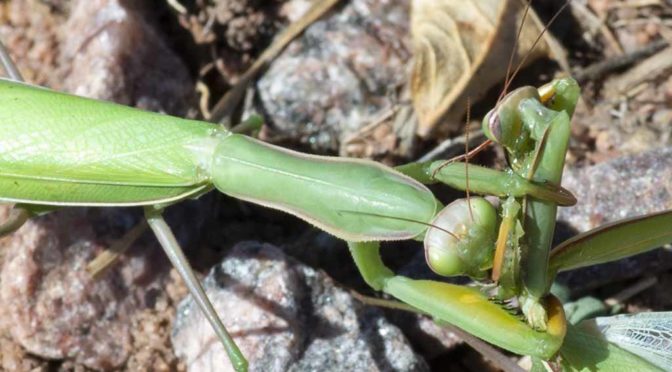 Within the Red Rocks Park exists an Eco-Savvy Micro Insect World Spring, Summer and Fall.    There is much more to The Beatles than simply music in-beat-sync, note and harmony of nature.   Take our beautiful honey bee shown below; she dances with true stars.

We plan on featuring more updates on fauna and flora as we collect and make available our photos and data from within the Red Rocks Park over the past years and future photo shoots.  Our Insects are cataloged by Order and Family.    Subsequent to that we will be featuring more Red Rocks Park insects as our blogs develop also.

Some see the Lions, Tigers, and Bears, oh my, as the Large top predators in the Planet.   However we can show you the same ferocity  in our Small bio-diverse Insect World here at the Red Rocks Park.

Below features, according to Professor Pearson, a unique photo with two Female Praying Mantis in a death-match fight.  There were many sightings of mantidae this summer which indicates that 2018 was a great year for the Praying Mantis to thrive.

We feature this still photo, captured by T. Johnson, of a female Praying Mantis eating another Female Mantis.  Masters of ambush this dominate Female with her female opponent captured and subdued;  is shown here removing her victims arm first before she devours her head alive, but not for long…

Professor Pearson believes this is a territorial battle  between the two females and something akin and as aggressive as, “I’ll eat you and your little babies too.”