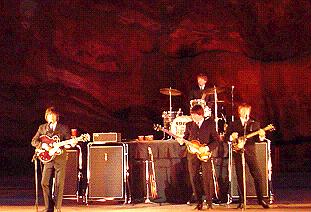 Welcome to our site that celebrates the rich History and Cultural Diversity of Red Rocks Park in Morrison Colorado.

The HDR Photo shown above was taken by me during the “Shpongles” Red Rocks performance on May10th, 2014.   One of the best light shows I’ve seen in a while.  Thick cloud cover over Mt. Morrison plus the Red Rocks; moreover, the Rocks Rock when used as backdrops for Laser Energy play.   Light Beams above and off into the clouds….

Speaking of being off in the clouds…I attended the Beatles Concert here at the Red Rocks one half a century ago with my older cousins and friends.   To be honest I remember not liking the concert due to slight but annoying hearing loss.    Yes the Ringo ringing went away in a few days.

It’s not that one doesn’t love the Beatles and still do~do; it was because of thousands of creepy screaming girls.  They were all screaming so loud during the entire concert I had to hold my hands over my ears to prevent my hearing from being hurt.   Wish I’d brought some cotton balls for ear plugs.  It’s hard to enjoy a concert when grown women and young girls alike all screaming behind me, to the left, to the right and in front at the same time.   A surge of women rushed the stage screaming and couldn’t really hear anything else over all those thousands of screams.

More not less screaming and as quickly as the Beatles were on stage, then they were off stage and the concert was over in what seemed to be or should I say “Let it Be” twenty minutes or so….    That experience has set the stage for all the concerts good, bad and Ugly.   I have seen my share and heard many a show too, follow, some of the best concerts I’ve ever seen on the Rocks; except for the Historic Mile Hi events like Pink Floyd another true classic rock moment in time.

Today’s concerts Brit sensations are like “Mumford and Sons”

or our local band “Devotchka” that set the stage for future music classics.  Here’s my dilemma when comparing concerts such as “Devotchka” and all their young and old hipsters alike.

“Destroid” and The Global Dance Fest -V- Devotchka has all the psychedelic folk happenings; but just seems pretty base boring to some if you’re not tripping.

One is orchestrated music/parting tune-age soul like “Devotchka” and the other is no songs at all with Party DJ Destroid tunes for the gamer generation running nonstop.  To the end all the RAVER E-vents called a Global Dance Festival Party and just, “let’s make some noise!” Sadly E-nough if you’re not on E then it’s just….
Speaking of average wonder what the average cut off age, from hip dude to creepy old guy, is for the Dub-steppers Dance Festivals or should I say E-vents…for Dudes?  One feels somewhere around the age of Twenty one, maybe?  Feel so creepy walking out just to go….  Some 17 year old chica’s hanging around in their Bra’s and Bikini bottoms near the ticket booth here at the Rocks.   Then just have to look away trying not to stare and thinking; “now I’ve become the creepy old guy.”   Yep U are rite, my only choice as a creepy old guy is to go see even creeper older guys playing in concert.   Crosby, Stills and Nash come to mind.  Sorry, don’t get me wrong because I still loves me some Stills; and where’s Neil, ‘not so’ Young when you need him this 2014 Summer of Stars at the Rocks?