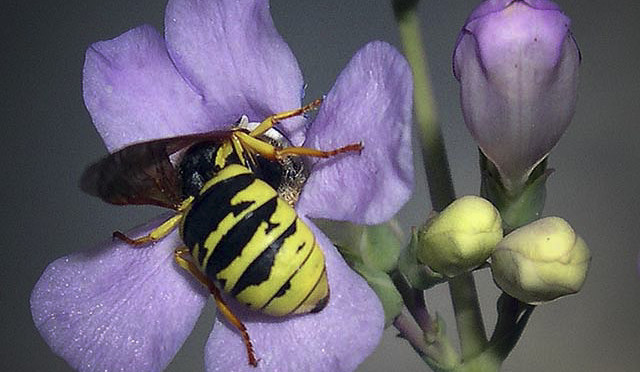 This group of insects is familiar to us all, the wasps. Not only does the ‘BUZZ’ Sound of the wings evoke the primal insect of “fight or fight;” but a brightly colored insect like this wasp is ingrained in our brains as well, a warning to respect them, or risk the consequences. No, doubt a hard lesson of “learn instincts” as a child and definitely carried through our adulthood. 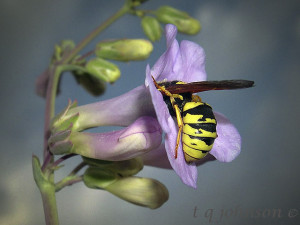 The Wasp below shown feasting on a One-Sided Penstemon, the local fast-food joint and home builders store is had at work and seemingly oblivious to my “flash fill” and several shots. 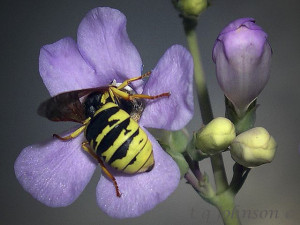 In North America, there are around 325 species. There are solitary species of wasps as well as social species in which there is a division of labor between queens, workers and males. Most species provision their larvae with insects or other animals. Social Vespidae construct nests from chewed pulp consisting of flowers, wood, vegetation or mud. In temperate regions, the nests are seasonal with only the queen over wintering.

The Garden Praying Mantis are carnivorous predacious insects in which the first pair of legs has developed completely for capturing prey. Below is a stylized gray scale relief of a “Dragon”; notice the elongated coxae (the first segment of the leg). In most insects, the coxae are quite small in comparison with the femur or tibia, not the case here just the opposite. Mantises have a highly developed sense of sight and can detect motion from a good distance away.

In addition, the head 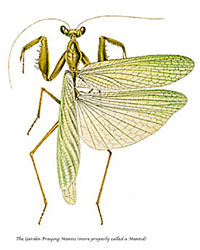 of this insect can swivel around and “look backward over its shoulder”. With her keen eye fixed on a meal the male, much smaller, still has to be careful how he approaches to court her in the Mating Ritual or become Lunch in the process. Then at the end of summer in early Autumn She seeks dense cover under fallen tree branches or timber for protection to produce a three-growth stage, dual larvae nest made of a Natural Foam Material similar to the synthetic creation of Dow Chemicals, Polystyrene…material called Styrofoam.

Worldwide there is around 1800 species most of which occur in the tropics. The earliest

fossil Mantidae appear in the Cretaceous period roughly 130 million years ago.   My Vote goes to the Mantis for the best of Bug Show in the Sex award category, meal et al.   Even after their heads have been chewed off by their female partners, these various insects continue to have sex for up to eight hours. 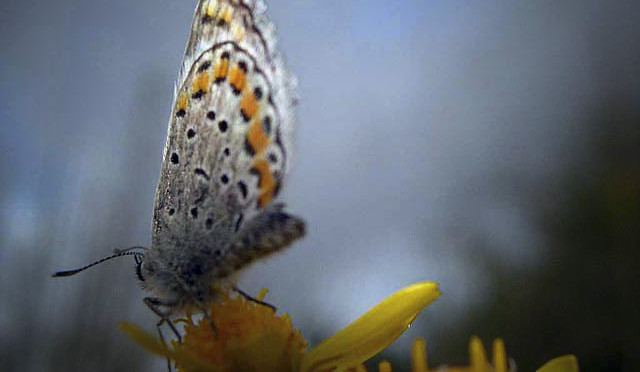 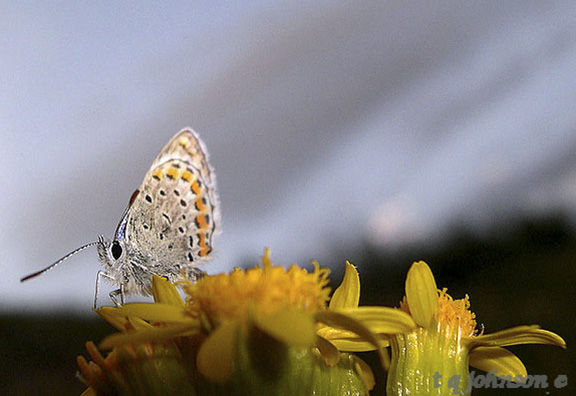 Lycaenidae are small, delicate butterflies with bright and striking coloration. A good characteristic of this family (of which there are around 160 species in North America) is the white bands of scales around the antennae as well as around the eye. This one is turned into the wind and gripping this Senecio Flower to ride out the afternoons turbulent breeze. 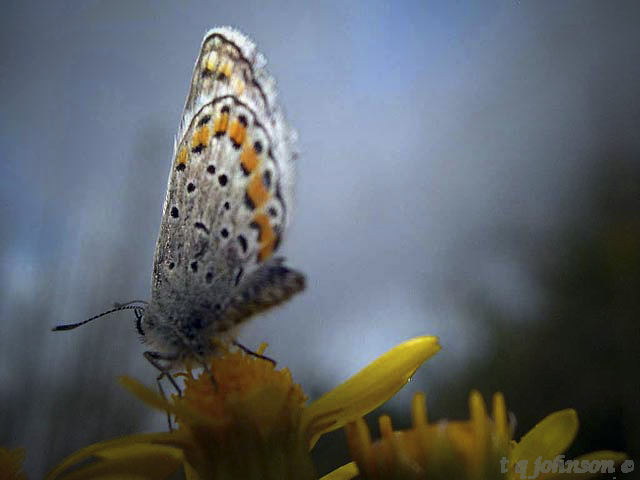 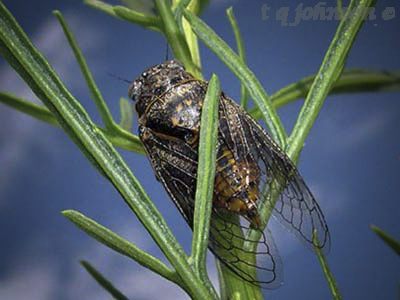 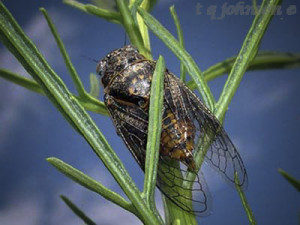 So, Who hits those real high ear piercing notes that’s a true bug performer/ rock and roll star? Definitely the Cicada’s rhythmically magical riffs ringing in the days hot times. Always a local favorite musical performer here as the boys of Dog-Days Summer. When Large groups of males congregate together to call a Female Mate it’s called, “Chorusing Centers,” The males can sing almost as loud as a concert here at the Red Rocks Amphitheater; well, almost- like between 80 and 100 decibels, where a rock concert can easily exceed 120 decibels.

Species of Cicadas are considered either dog-day cicadas or periodical cicadas. The periodical cicadas are among the longest living insects known. As you may have heard about on the news the 17 yr cicadas hatched out in the spring of 2004 in the Northeast of the United States. Scientist still don’t know why the timing is so accurate to the 17th yr exactly. There are six species of periodical cicadas; three 17 yr and three 13 yr types. In North America these insects are among the largest reaching lengths of 5 cm with the smallest about half that in size. Along Bear Creek in Morrison and Mt. Vernon Creek next to the Red Rocks appear these Dog-day cicadas every Summer.

Cicadas will fly up and crawl out to the tips of branches to lay eggs in the end twigs of trees and shrubs thus damaging that small area beyond the point of no return causing its demise and then falls to the ground. The egg develops for around a month before hatching into a larvae. When the damaged twig falls onto the ground the hatching nymph crawls under the ground and buries itself. Underground the larvae will find a root (mostly perennials) and using its sucking mouth parts (proboscis) attach itself to the root.

The sole food of the insect nymph comes from liquids flowing in the “plumbing” of a Tree Root and plants living in improved organic soil and can go a long way in explaining why the developmental time is so long for the 17 year variety. Beside a few trace minerals there is very little nutrition in a Tree Root and other plants including the rhizoid on root hairs.

Before the last molt to adulthood, the cicada will climb out of the ground opening little holes too, they crawl up into the natural grasses or other plants for cover to shed its final protective casing. In the summer these holes and casings seen (below) are readily observable. The adults live about a month or so around here until the cycle starts all over again.

While you may not have seen one of these magnificent insects you certainly have heard then. The often deafening sound that is so high pitched that its ringing becomes a familiar ‘Rock’ tune in the “dog days of summer.” Sometimes leading to crescendo’s of ear piercing length seemly inescapable at times when produced by hundreds cicadas, in the dog-day afternoon, of Tibicen pruinosa (seen above).

These high pitched ringing sounds are produced by the males to woe a Mate by what are called tymbals on the underside of the first abdominal segment. These tymbals are composed of rib like bands that contract and snap due to muscle control. A majority of space in the insect (last thoracic segment and first 5 segments of the abdomen) is a large air sac that acts as a resonator for the sound produced from the tymbals. Not all cicadas produce sound this way. A few species perform stridulating or wing-banging to produce sounds. 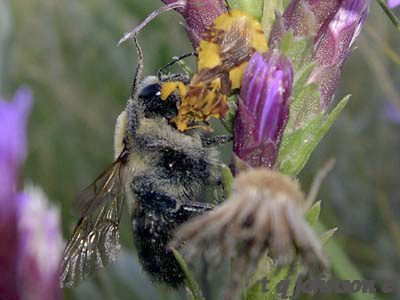 Hard to follow the Cicadas act…then, which ‘true’ bug has the sexy bad boy reputation with the big guns to back it up?

These predacious bugs were once classified with the family Reduviidae (assassin bugs) but recently given family status. Both assassin and ambush bugs, as their name suggests, are voracious predators feeding on all types of arthropods. Reduviidae in the genus Triatoma are vectors of disease (sleeping sickness) among humans. 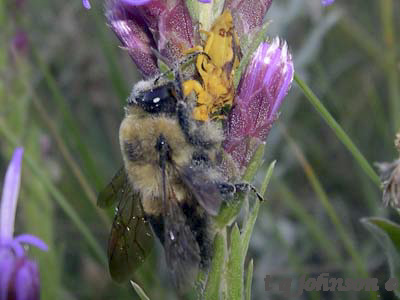 The Phymatidae (shown above) feeds mainly on bees, wasps (Hymenoptera), flies (Diptera) and of course a miller moth or two. They are stouter than the assassin bugs with enlarged fore limbs for grasping onto their prey. These brightly colored insects prefer flowers of similar or equal color value, such as this “Blazing Star” (Liatris punctata) to hid in camouflage for an ambush position grasping onto prey as it approaches to feed.